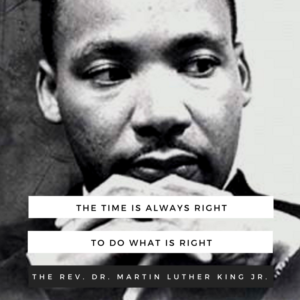 I am writing this message on Martin Luther King Day, just four days before the next presidential inauguration. The juxtaposition of these two events underscores the deep racial and economic divisions that have haunted our national polity since its inception in the late eighteenth century. These divisions have seldom been more evident.

For perhaps the first time in my life as a Christian in America, I realize that if I really believe what I say when I repeat the promises of the baptismal covenant, my political and cultural passivity is no longer acceptable. In the current political climate, when a hero of the civil rights movement (and the great city he represents) can be so ignorantly pilloried by the most powerful man in the country, silence is no longer an option, any more for us than it was for Dr. King. If we really mean as Christians to uphold the dignity of every human being, and to make no peace with oppression, there is hard and risky work ahead.

Elsewhere in this newsletter, you will see an invitation to gather with your fellow alumni and friends of the seminary at our April 26 convocation, Bending Toward Justice, to be held at St. James Common in Chicago. My hope is that the work of that convocation will resonate with the prophetic witness of Dr. King and Congressman John Lewis. We are honored that the Rev. John Floberg, long-time priest at the Standing Rock reservation and a Bexley Hall alumnus, has agreed to speak to us about his work in organizing the clergy participation in the recent Standing Rock protest.

In a panel discussion, John will be joined by our keynote speaker, the Rev. Gayle Stewart-Fischer, a former police officer and now Episcopal priest, and founder of the Center for Faith in Justice in Washington, DC; and by Mr. Kenji Kuramitsu, an Episcopal seminarian at McCormick Seminary. Kenji is an eloquent writer and speaker on issues of civil rights and ethnic justice, and a member of the national board of the Japanese American Citizens’ League.

Please mark your calendars; tell your friends and colleagues; and urge them to attend on April 26 at St. James’ Common, 65 Huron Street, Chicago. The convocation begins at 2 p.m. and ends with a reception following Evensong at 5:30.