The Crowd at the Foot of the Cross 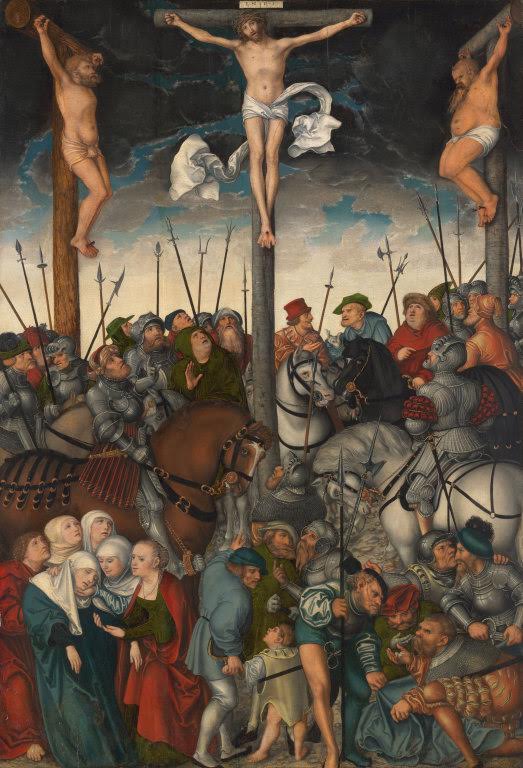 The Crucifixion, 1538 by Lucas Cranach the Elder

This year at this Good Friday service, we are introducing a new practice to complement our much more ancient one.

The ancient practice will be familiar if you have come to this service before. In a few moments, we will bring a large, rough wooden cross into the room, in solemn procession down this aisle. As soon as the cross is in place, the Prayer Book informs us in a carefully worded rubric that “appropriate devotions may follow.” That’s implicit permission for us post-Reformation Christians to revive a pre-reformation Good Friday ritual. Once we’ve set it down, everyone here should feel free to approach the foot of the cross in an act of veneration. Some of us might simply kneel there for a moment, in silent contemplation. Some of us might reach out to touch the wood. Some might even kiss it. If past experience holds, a number of us will simply remain in our places, sitting still and silent, perhaps a bit uneasy, absorbed in our own private reflections. Whatever you decide is appropriate. Meanwhile, the choir will sing settings of one of the few anthem texts included verbatim in the Prayer Book itself:

Savior of the world,
Who by thy cross and precious blood hath redeemed us:
Save us and help us, we humbly beseech thee, O Lord.

That’s the ancient practice. But if you’ve attended Sunday services here during Lent, you would have heard that we are also starting a new one. You would have had an opportunity to write a prayer or intention on a little card, seal it in an envelope, and deposit it in the empty baptismal font. As we carry in the cross today, we will carry in all the cards that have been collected in the past few weeks. We will strew them at the foot of the cross, as silent testimonies to our sorrows, penitence, cares, and desires, both for ourselves and for those who matter most to us.

It will get crowded today at the foot of the cross.

If we can believe the Gospel accounts, that would not be unusual. There were quite a few people gathered on the killing ground outside the city gates to watch the original proceedings. I did a quick census of the four gospels. Mark and Matthew set the record for attendance. Besides the soldiers; the chief priests and scribes; those who passed by; and the bystanders, Matthew and Mark single out as many as nine people specifically, several of them by name: Simon of Cyrene; the two bandits; the centurion; Mary Magdalene; Mary the mother of James and Joseph; the mother of the sons of Zebedee; Salome. In his gospel, Luke talks about the “great number of people” who followed Jesus to watch the “spectacle.” “Spectacle”: that’s Luke’s word, not mine. Witnesses to the spectacle, Luke says, besides the soldiers and the rest, included all Jesus’ acquaintances, including the women who had followed him from Galilee. They perhaps wisely stood at a distance, but close enough to see. Then of course there was Joseph of Arimathea, who helped get the body down from the cross once the crowd dispersed. John’s gospel also mentions Nicodemus. He’s the one who John tells us had come to Jesus in the middle of the night, who was told to his dismay that he needed to be born again, born from above. Who knows what was going through his mind if he remembered that encounter as he helped Joseph wrestle down the corpse. John’s account also mentions a crowd, but like a good cinematographer John likes to engineer dramatic close-ups. The crowds disappear as the camera zooms in on Jesus’ mother and the disciple whom Jesus loved, and we witness a macabre combination ordination and adoption ceremony: Woman, behold your son. Son, behold your mother.

Strange and unsettling things can happen at the foot of the cross.

This was not, of course, either the first or last execution designed as spectacle. Until recent times, executions almost always drew a crowd. That was part of the point. For a long time, executions were specifically designed for maximum public effect. Sometimes, like Jesus’ execution, these public spectacles were organized for easy public access to discourage similar insurrectional impulses, or to placate the public’s perceived need for retributive justice, or to terrorize people into submission to authority.

But truth be told, executions also provided huge sources of public entertainment. I suspect that was the case for at least some of the bystanders and the curious who gathered on Golgotha. There were public executions at the hanging ground at Tyburn in London right through the 18th century. There were well-attended beheadings by guillotine during the Reign of Terror in Paris in what is now ironically named the Place de la Concord. Those were the better-known spectacles.

We in this country, of course, have our own bloody stories to tell. There were those dreadful, hateful lynchings of black citizens in the American South. Those events, too, were treated by spectators as entertaining sideshows. You can see that for yourself in the surviving photographs that circulated for months after each event, sent through the mail as sordid postcard souvenirs. Repressed desire and vile racist hatreds are everywhere in evidence on the faces of witnesses in those photographs, lazily munching their boiled peanuts as they hoist their children to their shoulders for a better view of the swinging corpse.

It’s always been a bit crowded at the foot of the cross.

Until recently, that is. One of the ironies of the current legal practice of capital punishment is that it has gone strangely private. If Jesus were on death row today, Mary and the beloved disciple could not get close to him even if they tried. Witnesses to these spectacles are few, and getting fewer. I don’t know whether you have been following the stories out of Arkansas. It seems that starting on Monday, Arkansas intended to execute eight convicted criminals, two a day, by chemical injection. They are in a hurry because the supply of midazolam, one of the three lethal chemicals used in such executions, expires on April 30, and drug makers have pretty much cut off any further supply. The Arkansas Department of Corrections is eager to use what’s in stock before the well runs dry. But according to an NBC report that came out a few weeks ago, there’s a catch. The law requires that at least “six respectable citizens” must view the executions to confirm that they “are conducted in the manner required by law.” But they were having trouble finding the 48 witnesses they needed. The director of the department even paid a visit to the regular meeting of the Little Rock Rotary Club to find volunteers. The Rotary Club president told NBC that at first there was a little laugh from the audience, because they thought she was kidding. It quickly became obvious that she wasn’t. The Department now says that people could double up, which would reduce the numbers of witnesses required. I take it as a good sign that no Rotarian came forward, which means the whole thing might end up delayed.

O Savior of the world,
Who by thy cross and precious blood hath redeemed us:
Save us and help us, we humbly beseech thee, O Lord.

We, too, gather here as witnesses, but not the kind of witnesses that the authorities in Little Rock are trying so desperately to gather. We gather here as witnesses willing to testify to the richness of God’s mercy, to the depth of God’s compassion—a compassion revealed in the broken body of the crucified one, a broken body that gives hope to all the broken bodies of this world: to those who suffer, to the oppressed, to the hungry and thirsty, to the exiled and the refugee, to all who live in fear in this city, to all those for whom our prayers have been requested, for all those intentions that we will now lay at the foot of the cross.

If you wander through the galleries at the Art Institute, it won’t take you long to find paintings of the Crucifixion. Most of them devote a lot of canvas to depicting the crowd. The image on today’s service leaflet was painted 500 years ago in Germany by Lucas Cranach, a close friend of Martin Luther’s. You might notice that Cranach has divided the crowd pretty decisively, as if he were painting a scene of the Last Judgment. He puts the good people (and the good thief) at Jesus’ right hand, all of them focused on the cross. On Jesus’ left, there’s a pretty sinister crew, looking pretty much every way but up. That kind of black and white thinking is all too familiar to us these days, a judgmental polarizing for which our country—like Cranach’s Europe 500 years ago—seems poised to reap the whirlwind. It’s probably the least attractive aspect of this image.

But then you notice the two people Cranach positions directly below Jesus feet. You see a father standing with his young son, the father’s hand pointing upward. They stand on neither one side nor the other. The father wants to be sure that the boy isn’t distracted by the noise and dust and tears that surround him. He wants his son instead to keep his eye on what matters most, on the dying criminal who is no criminal, the suffering God who now, lifted up, for better or for worse, draws all humanity to himself. As the father directs the young boy’s gaze, so Cranach directs ours.

Which brings us back to this time, to this room, and to the ritual action that will soon take place. You will notice in Cranach’s picture that the people gathered at the foot of the cross are not wearing first-century costumes. Neither are we. We gather here in our ordinary clothes, as our ordinary selves—or as the hymn declares, we gather just as we are. We gather first to lay our petitions at the foot of the cross, those simple sealed envelopes that contain the mute but eloquent testimony of our failings and our desires, of our penitence and our gratitude. In so doing may we also present ourselves, our souls and bodies, as agents of justice and reconciliation, trusting in God’s mercy and loving kindness even here, at the foot of the cross, even in these dark and perilously divided days.

O Savior of the world,
Who by thy cross and precious blood hath redeemed us:
Save us and help us, we humbly beseech thee, O Lord