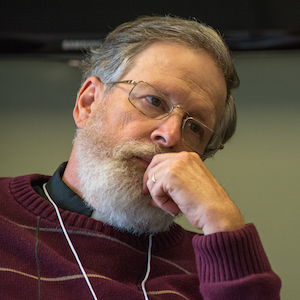 The Rev. Bruce Smith serves as Priest Associate at St. James Episcopal Church in Clintonville (Columbus) Ohio.  He retired at the end of 2012 from active parish ministry after more than 12 years as associate rector of Saint Mark’s Episcopal Church in Columbus. Fr. Smith is busy as a supply priest in the Columbus area, and coordinates the weekly Bible study for Columbus Episcopal clergy as well as a bi-monthly clergy Quiet Day.

Bruce studied for ordained ministry at Drew Theological School in New Jersey where he earned a Master of Divinity degree in 1996.  He also studied at the Methodist Theological School in Delaware, OH where he received the Master of Theological Studies degree in 1999.  He studied for the General Ordination Exams with Bexley Hall faculty.  At Christ Church Cathedral Cincinnati, he was ordained deacon in June 2000 and priest in January 2001.

Bruce has served as chair of the Affirmative Aging Commission of the Diocese of Southern Ohio and has also served on the Diocesan Stewardship Commission, the Diocesan Budget Committee and Diocesan Council.  Smith is past member of the Interfaith Center for Peace, and serves on the Board of Directors of Episcopal Retirement Services, Inc., where he chairs the Fund Development Committee.

Prior to seminary, Smith served for 22 years with New Jersey Bell and AT&T, retiring from AT&T in 1996 as a staff manager in government affairs.