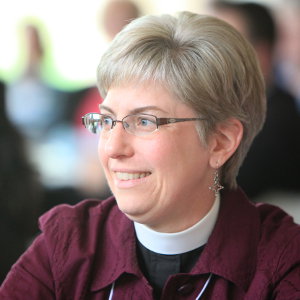 The Rev. Mary Carson is Rector of St. James’ in Cincinnati and is a second-generation graduate of Bexley Hall. Her father held an MDiv from Bexley Hall and Mary was granted the same degree in 1992. Prior to her current position, Mary served as interim, priest-in-charge, and rector of the Church of the Redeemer in Lorain, Ohio for 7 years. She was the associate executive director and then interim executive director of Lutheran Chaplaincy Services in Cleveland, Ohio from 2007-2010. Mary was on the staff of the Bishop of Ohio with responsibility for deployment and ministry development from 1999-2007. In her early years of ordained ministry she was on the staff of parishes in Newport, Rhode Island; Gladwyne, Pennsylvania; and Sandusky, Ohio.